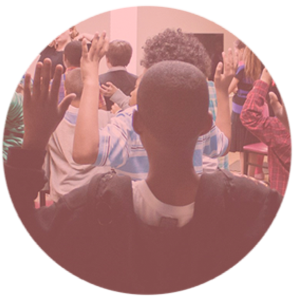 Anyone who listens to my teaching and obeys me is wise, like a person who builds a house on solid rock. ~ Matthew 7:24

Abraham’s sacrifice of Isaac represents a faith that acts, not one that just talks. Anyone can say, “I trust the Lord,” but raising a knife to one’s most precious possession is proof of real faith.
It is not enough to only hear the commandments of God — we must do them. James said, “Fool! When will you ever learn that faith that does not result in good deeds is useless?” (James 2:20). There comes a moment in our lives when we must translate talk into an action that demonstrates the reality of our faith.
As Abraham climbed the mountain of Moriah, his faith gave energy to his actions. In his mind he had reckoned that God was able to raise up Isaac, even if he died (Hebrews 11:19). Abraham’s faith risked all and lost nothing.
Let’s step out in obedience. When we do, God will have the ram waiting in the thicket!

They immediately followed him, leaving the boat and their father behind. ~ Matthew 4:22

Something about the comfort and safety of the boat makes it hard to leave!  After Noah had floated in the ark for months, God caused the floodwaters to recede and directed Noah and his family to leave their haven of refuge.  Surely Noah wondered what it would be like outside the ark.

Peter, too, knew the safety of the boat.  But one day Jesus challenged him to leave the known and enter the unknown realm of “fishing for men.”  Can’t you just imagine how Peter must have felt?  What would it be like to wake up every day and follow Jesus? he must have thought.

The boat represents old habits, securities, and ways of doing things.  Peter had been a fisherman for years; Noah had been confined to the security of the ark for months.  Both had to decide if they would dare to follow the One who called them.  When Noah sent the dove out the second time and it did not return to him (Genesis 8:12), he knew it was time to leave the ark.  Like the dove, he had no desire to stay in his world of former security.  When Peter heard the voice of the Master, he knew it was time to leave the place of family refuge and

Once you have tasted of a new world — a world of ministry – you will have no desire to return to the mundane routine of life.  Leave the boat, my Christian friend.  A new world awaits you!

Whatever we do, it is because Christ’s love controls us.  Since we believe that Christ died for everyone, we also believe that we have all died to the old life we used to live. ~ 2 Corinthians 5:14

Want to know why you should be a witness for Jesus Christ?  Because He died for all, and therefore, all died.  Because you died with Christ, you should no longer live for yourself (2 Corinthians 5:15).  Because you no longer live for yourself, you are no longer the same person you were. “What this means is that those who become Christians become new persons.  “They are not the same anymore, for the old life is gone. A new life has begun” (v. 17)!

God has given you, as a “new creation” believer, the task of reconciling people to Him (v. 18).  Your message of reconciliation is this: “For God was in Christ, reconciling the world to himself, no longer counting people’s sins against them. This is the wonderful message he has given us to tell others” (v. 19).  Legally, the world has already been forgiven in Christ; thus, your job is to be His ambassador, imploring people on Christ’s behalf to be reconciled to God (v. 20).

The conclusion?  You are dead to your former life and thus unconcerned about public opinion.  You live only to inform the lost that Jesus reconciled them to God. Some will receive, some will reject, but all must be told. That, dear ambassador, is your mission!